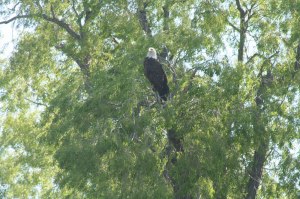 A mature bald eagle looks out on marsh.

Ecosystems provide valuable ecological services that should be added to the decision matrix when projects that may impinge on them are being considered. It’s an approach that is building steam though one deemed too esoteric by some engineers and planners.

How, after all, does one ‘measure’ the ‘value’ of an ‘ecological service’?

A puddle provides an albeit temporary home to microorganisms but any suggestion that its biological value is even worth measuring, many would probably aver, is over the top. A puddle’s transitory existence as a true ecosystem does, however, have an ecological value. We can scale the puddle to many puddles, then creeks, streams, rivers and lakes. In isolation, the solitary puddle has no value but the core point in ecology is that nothing truly exists in isolation.

Engineering solutions often treat a project as if it were isolated — and entirely separated from — its environment. That approach is changing, if slowly. However when, in the late-1950s, the province and Manitoba Hydro began studying using Lake Winnipeg as a giant reservoir for the production of hydroelectricity, there was no thought given to ecological impacts. But, there have been huge and detrimental impacts caused by what is now the third largest hydroelectric reservoir in the world.(1)

Netley-Libau Marsh, at the south end of Lake Winnipeg, has been degraded since lake regulation began in 1976 with the completion of the Jenpeg Generating Station and its associated control structures at the north end of the lake. A 2004 study (2) concluded, for instance, that the marsh no longer functions as a true coastal wetland.

The study’s authors laid a large measure of the blame on the regulation of lake levels that is required (from an engineering perspective only) to optimize the production of electricity. Lake regulation reverses the natural flushing of the lake, for instance.

“Netley-Libau Marsh is not, in our view, functioning as a healthy coastal wetland,” the authors conclude. “Instead, it resembles more closely a shallow turbid lake. In 1979, the marsh was a highly structured complex of channels, bays, island, and uplands. By 2001, amalgamation of small water bodies into large open expanses with few islands had resulted in simplification of the physical structure. Any benefits to Lake Winnipeg which the marsh could provide as wildlife and fisheries habitat, and in removing and storing nutrients that would otherwise enrich the lake,

have probably been degraded or lost.” (3)

The human-caused degradation of Netley-Libau Marsh has resulted in a significant loss of the ecological services it provided to Lake Winnipeg, migrating and nesting water fowl, and as a natural nutrient and carbon sink. The loss of marsh trees and vegetation is both an ecological and an aesthetic insult.

People who live on or near the shores of Lake Winnipeg have claimed that the artificial regulation of lake levels has increased shoreline erosion. Manitoba Hydro has offered what it believes, not surprisingly, is a convincing argument, demonstrating that the range of highs and lows has dampened so that both high- and low-water events have been virtually eliminated when one compares data pre- and post-regulation.

Those who do not accept the Crown utility’s arguments might suggest that the tens of millions of dollars spent by property owners and municipalities to armour shorelines since regulation began would count as a ‘valuation’ of the ecological disservice done by the mega-project.

Once again, Manitoba Hydro argues that the net financial gain to the province has included low electric costs to all Manitobans, as well as money for the provincial treasury from export sales, particularly to northern and Midwestern states.

The electric utility’s headlong rush to take advantage of Lake Winnipeg as a cash cow — done, it should be stressed, with the encouragement and unflinching and uncritical support of successive provincial governments — becomes an important lesson in how mega-projects of this nature should not be undertaken.

Smaller projects — at least those of a size that would require an engineer’s oversight to complete — should include a valuation of ecological services.

To flesh out this notion of ecological services, we consider the honeybee.

It is a fascinating creature in and of itself. But how can we say a honeybee provides/performs an ecological service? One need only consider the bee’s more-than-salutary contribution to crop pollination.

Cross-pollination occurs in the absence of bees. The pollen can, for example, be transferred to other plants by wind. But that is inefficient and, relatively, incomplete. That’s where the bee comes in. Because of large number and a voracious appetite, bees accelerate the rate of cross-fertilization (pollination) well beyond what can be accomplished by wind alone.

We accept, then, that the honeybee is critical to food production because it is an efficient vector for the transmission of pollen in vast croplands. Can we place a value on this ecological service?

In fact, we can, we do (if only recently) and we should.

According to a 2010 study, “The Economics of Ecosystems and Biodiversity (TEEB)” (4), insect pollination globally accounted for Euro150 billion annually or about 10 per cent of the value of total agricultural production each year.

Not only is the ecological service of extrinsic value, its valuation suggests something else: protecting the honeybee is critical to global food production and, more, the best way to achieve that is to ensure that the bees’ habitat is not degraded.

Insect pollination is but one example. We can, using quantitative statistics gathered by most countries, apply the valuation of ecological services to peatlands, forests, waterways, wetlands and so forth.

Keystone Agricultural Producers, a farm lobby group in Manitoba, was a driving force in developing a model dubbed Alternative Land Use Services (ALUS). ALUS became a blueprint for governments and agricultural producers; a model that encouraged governments to pay producers for the ecological services the latter provide.

A farmer who retains sloughs or wetlands instead of filling them for cropland would, under this scheme, be compensated for the ecological service provided. The provincial government would, much later, offer such monetary inducements to producers but, as of this writing, the buy-in has been, relative to the proportion of land in agri-Manitoba, negligible.

(In its 2010 progress report to the province, the Lake Winnipeg Stewardship Board rated as ‘marginal’ the progress made to enhance the effectiveness of ALUS. [5])

1.) One can forgive the engineers, planners and politicians of the day. The wider views of environmental responsibility, now taken for granted or, at the least, ruefully acknowledged, had yet to surface in any meaningful way. The engineers, planners and politicians of the 21st century are much more inclined to take account of the environmental and ecological consequences of what they do — though there is yet a long way to go.